Syracuse Crunch AHL All-Stars Kristers Gudlevskis and Matt Taormina will be at Destiny USA for a meet and greet on Monday, Jan. 25 from 6 to 7:30 p.m.

The meet and greet will take place in the food court at Destiny USA. Gudlevskis and Taormina will meet with fans and be available for autographs and photos. Additionally, fans will have the opportunity to enter to win tickets to the 2016 Toyota AHL All-Star Classic along with other prizes courtesy of the Crunch and Destiny USA. 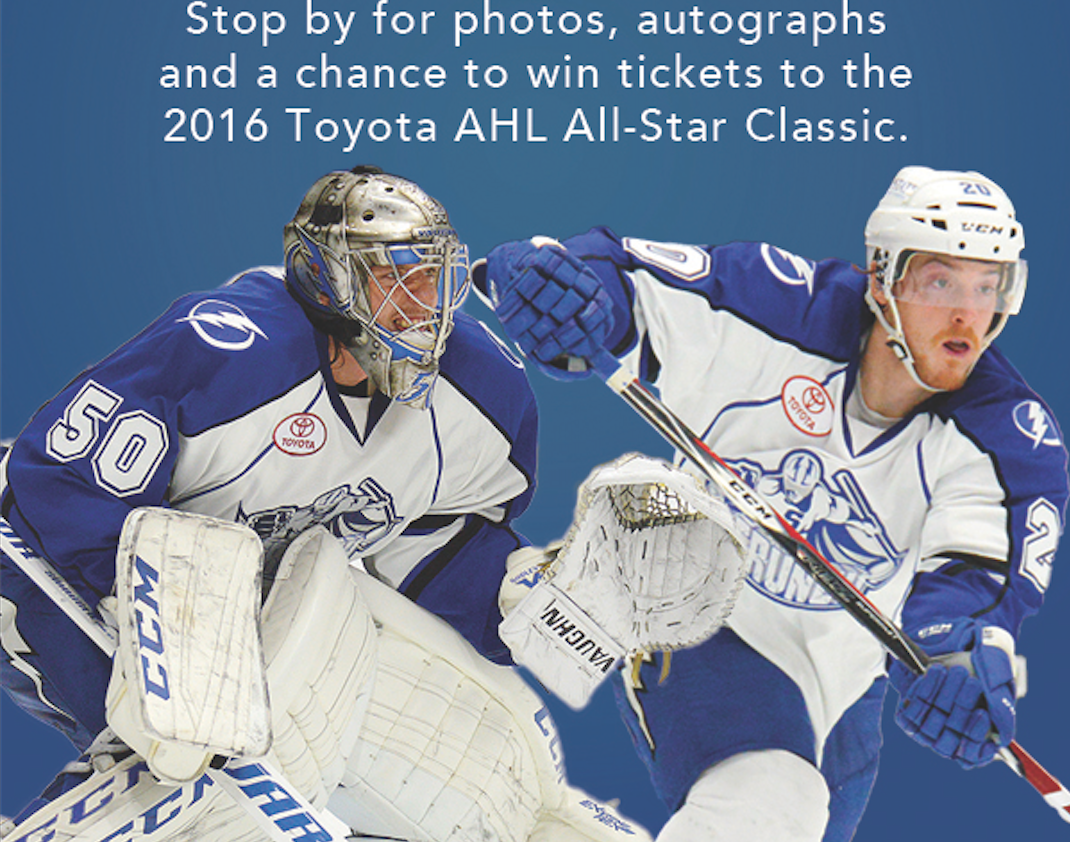 A limited number of tickets for the 2016 Toyota AHL All-Star Classic are still available. They can be purchased either in person at the Syracuse Crunch office located in the War Memorial Arena at 800 South State Street in Syracuse or by calling (315) 473-4444, through all Ticketmaster outlets or online at www.ticketmaster.com.

The 2016 Toyota AHL All-Star Skills Competition on Jan. 31 (8 p.m. ET) will keep its traditional format, with All-Stars from the Eastern Conference squaring off against All-Stars from the Western Conference in seven skills events. The 2016 Toyota AHL All-Star Challenge will take place on the evening of Feb. 1 (7 p.m. ET) and instead of a traditional 60-minute game, the AHL’s All-Stars will be divided into four teams, one representing each of the league’s divisions (Atlantic, North, Central, Pacific). The teams will then play a round-robin tournament featuring six games of nine minutes each; the first half of each game will be played at 4-on-4, and the second half at 3-on-3. The two teams with the best records at the end of the round-robin tournament will face off for the championship, a six-minute game played at 3-on-3.

In operation since 1936 and celebrating its 80th-anniversary season in 2015-16, the AHL continues to serve as the top development league for all 30 National Hockey League teams. More than 88 percent of today’s NHL players are American Hockey League graduates, and for the 14th year in a row, more than 6 million fans attended AHL games across North America in 2014-15.

Syracuse Crunch single game and season tickets are on sale now and can be purchased either in person at the Crunch Box Office located in the War Memorial at 800 South State Street in Syracuse or by calling the office at 315-473-4444. For the latest Crunch news, visit www.syracusecrunch.com or follow the club on Facebook (www.facebook.com/syracusecrunch), Twitter (@SyracuseCrunch) and Instagram (@officialsyracusecrunch) using #SyrCrunch and #BelieveInBlue.

Prev
See All Events
Next
0